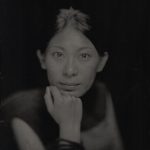 Originally from China, currently based in France, Zhen SHI is a visual artist, has produced a diverse body of work comprising of photograph, artist’s book and video.

After completing her studies in Paris, she went back to some isolated villages around southwest of China where she met a couple of reclusive artists and folk artisans. She was strongly touched by their natural way of living and working, and that experience pushed her to the way of where she is.

Zhen’s work is mainly derived from the intricate relationship between realities and memories. She presents with her personal experience, with her seeing from inside to outside, which probably enable her to balance the memory and the reality among the existence of time.

However, “time” exists and disappears in a soundless way. Its real existence in and illusory demise from her life is so much like a lie that it’s hard to tell the true from the false. If “the present moment is passing”, the past and the future can be  defined as a kind of memory or up-coming memory for the wanderer of time being. Only “the existence”, the reflection of reality as representation, is still.

This way, her personal consideration becomes the consideration of everyone. The unanswerable question of relationship between realities and memories effects a kind of “universalization”, yet allowing to recognize oneself in her story.